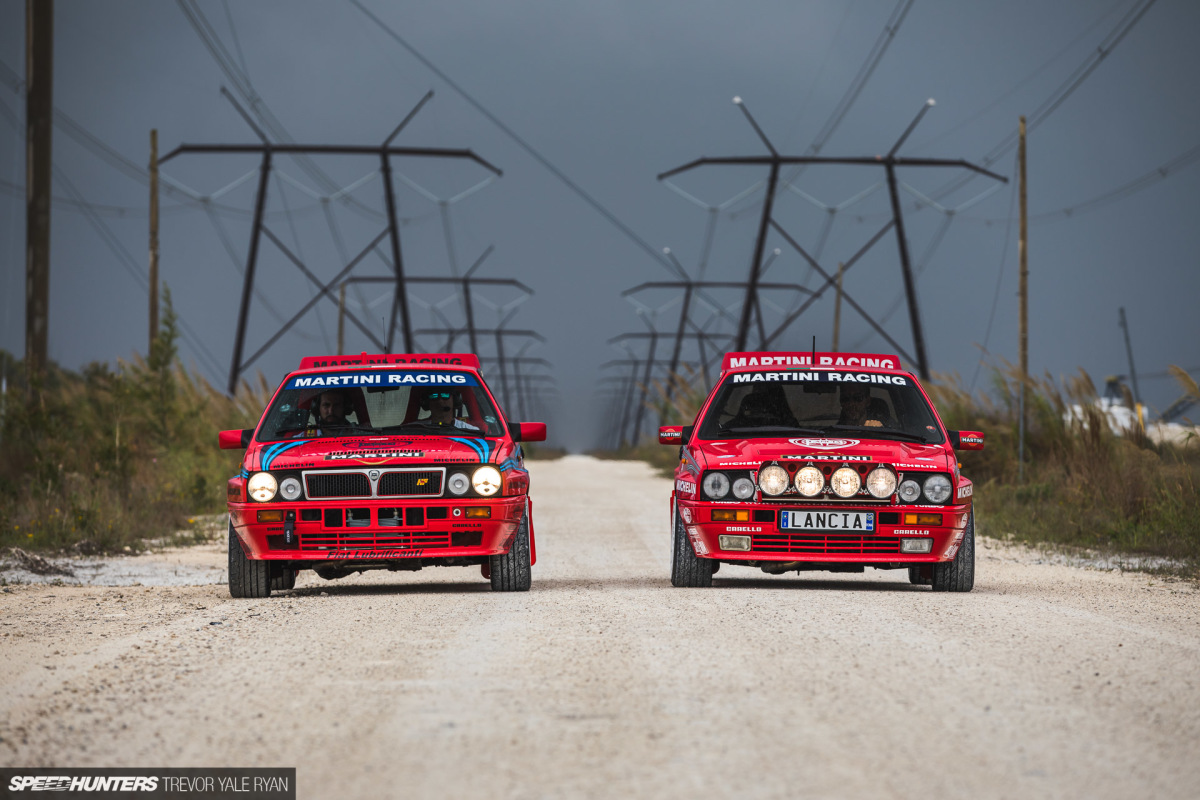 During a visit to Florida earlier this year, we stopped in at The Barn Miami and found ourselves surrounded by a well-cultivated collection of interesting cars.

The Barn – essentially a boutique dealership for exotic and collector cars – is managed by the Rossato brothers, Gaston and Renzo, and their father who mesh together to manage the flow of their collection. Three handsome men, their beautiful cars, the warm Miami breeze – it was all perfectly classy and timeless. While there were many cars in their possession that I could ogle at (more on that another time), I really couldn’t take my eyes off a pair of Lancia Delta HF Integrales. 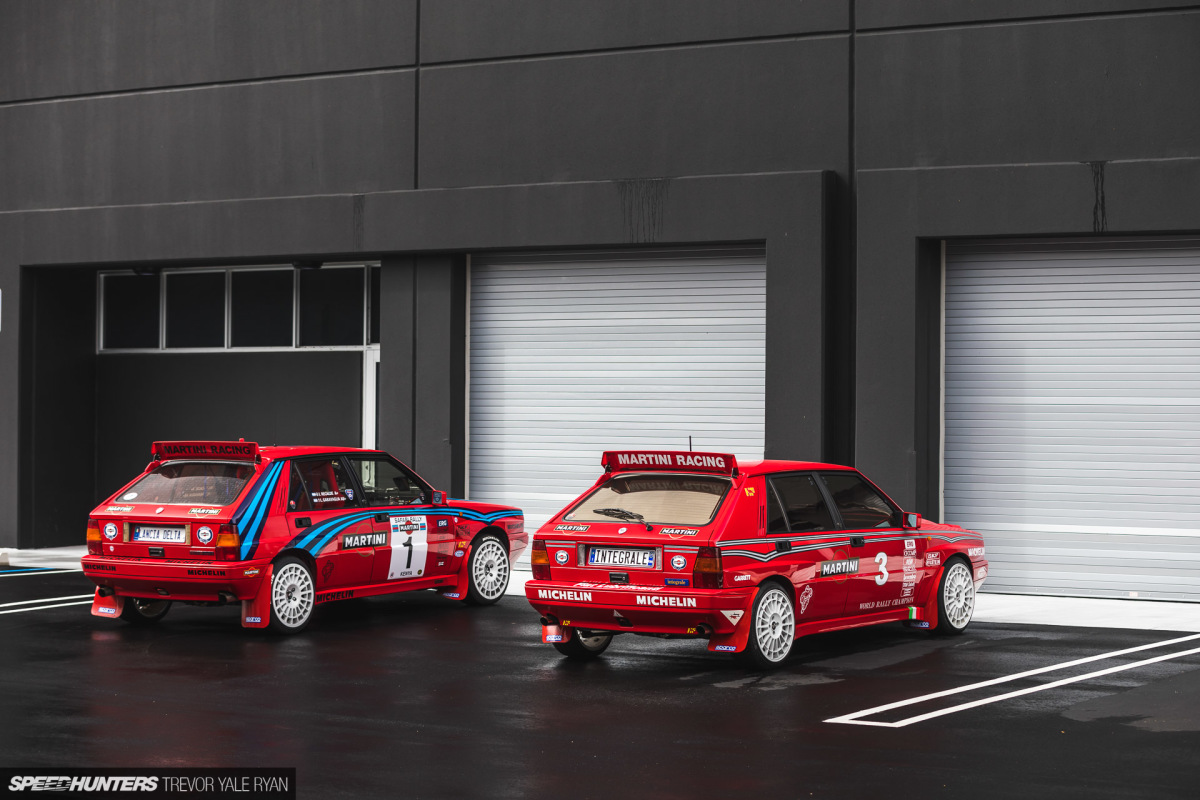 So we hopped in, grabbed some gas, and took them out to some dusty backroads to see these rally kings in their natural habitat.

This was was supposed to be a dusty road out of town, but as you might know yourself, location scouting when out of state can be tricky, and often we end up going with a plan B when we arrive. This time, a few miles from the center of Miami, the location was beyond perfect for a pair of cars whose history is as rich as the gravel they glided above. 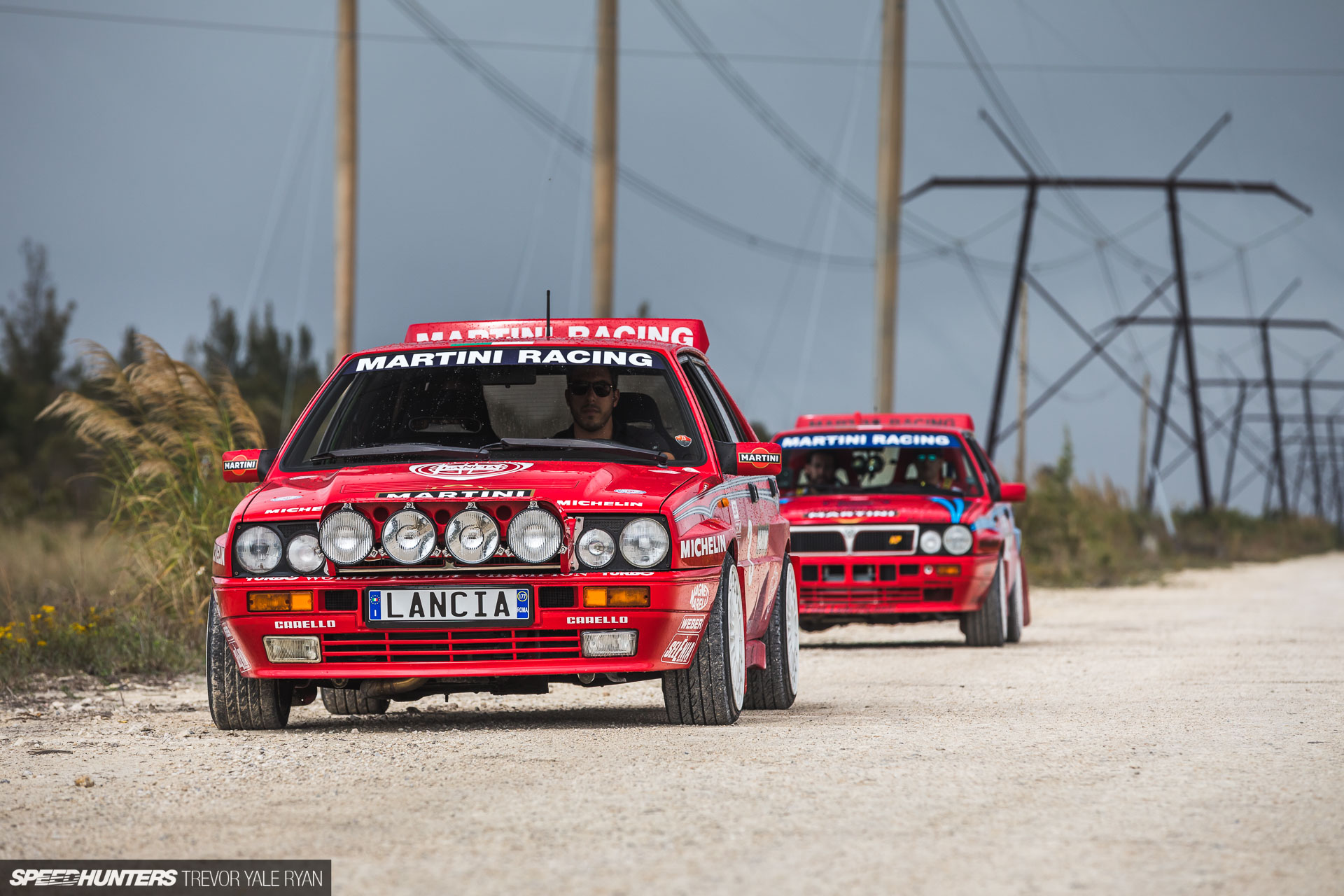 While Trevor was out in the wet shooting, the Rossato brothers and their enthusiast friend, Luciano Garavaglia, filled me in a great deal.

Today, Lancia currently only manufactures one car in one country — the Ypsilon, in Italy of course. However, as we all know, the company has an impressive and proactive history that led to the creation of the cars we had the pleasure of experiencing face-to-face in Miami.

The founders of Lancia had a vision that any great company should have: To create an incredible and innovative car company without the confines of a budget. Sounds almost too good to be true, and yet they did just that time and time again, engineering and designing some truly wild vehicles along the way. Lancia is credited with producing the first car with an electric starter and headlights as standard equipment, the first with a 5-speed transmission, and the first with a V6 engine.

Lancia made some great-looking cars during the ’50s and ’60s in Italy, but by the mid-’80s the company had created arguably the best rally car of all time – the Lancia Delta. The Delta was marketed both as a family-friendly, front-wheel drive grocery-getter, as well as a highly-competitive and powerful all-wheel drive rally car. We were over-the-moon to get to see two done-up, rally-inspired examples of these Italian stallions in the wild.

Before we dive into each car, have a listen to some gravely wheelspin paired with a nice, crackly exhaust as the rain falls around us. Something tells me the new Ypsilon doesn’t sound like this, and it doesn’t seem like Lancia themselves know where the Ypsilon belongs. It’s described on the Fiat-Chrysler Automobiles website as “the small car most loved by Italian women,” and the website also claims that “special series trims ensure every woman can find the perfect vehicle to express her individuality and authenticity.”

I’m not convinced that I know what that means, but what I do know is that the Lancia Delta has no such identity crisis. 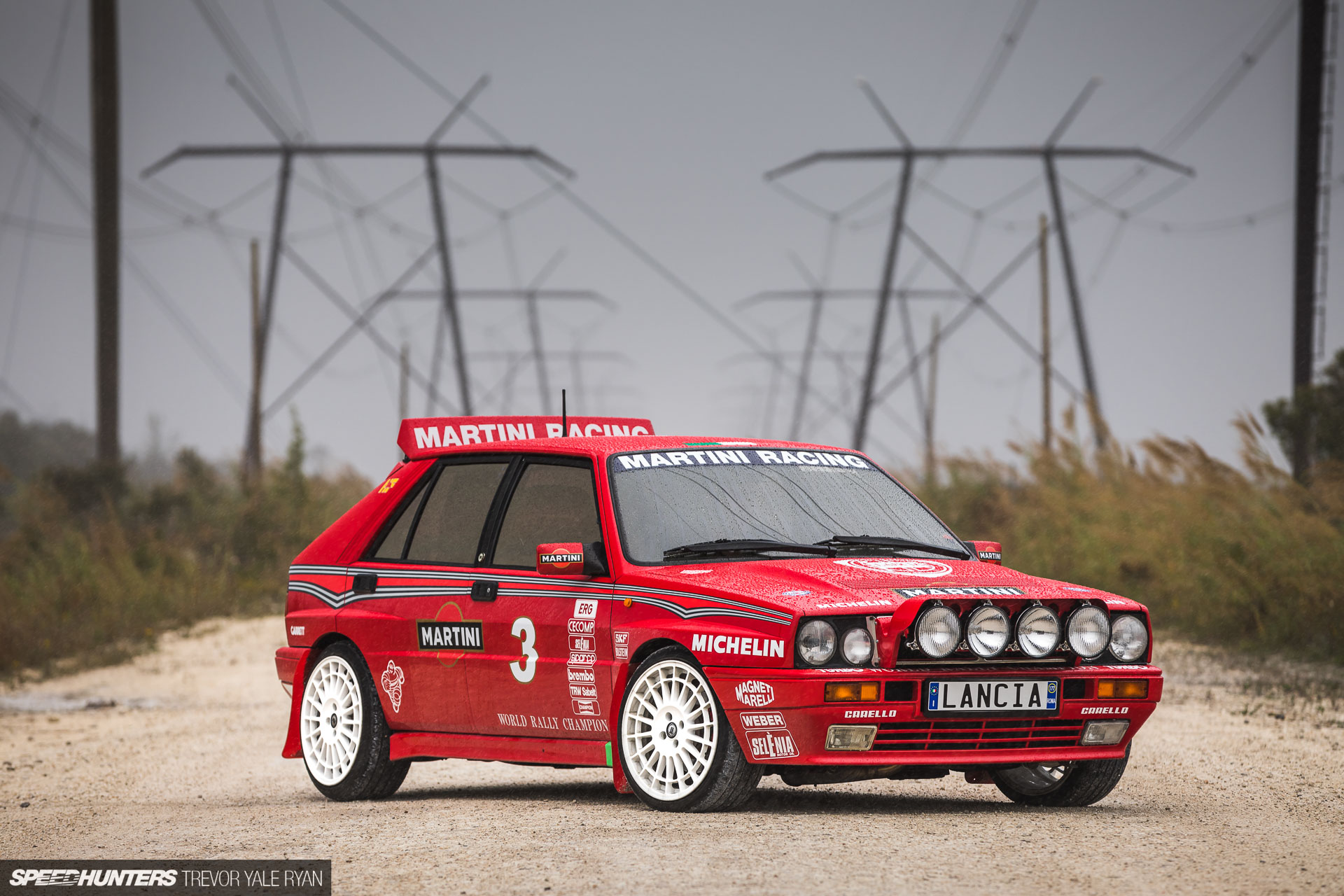 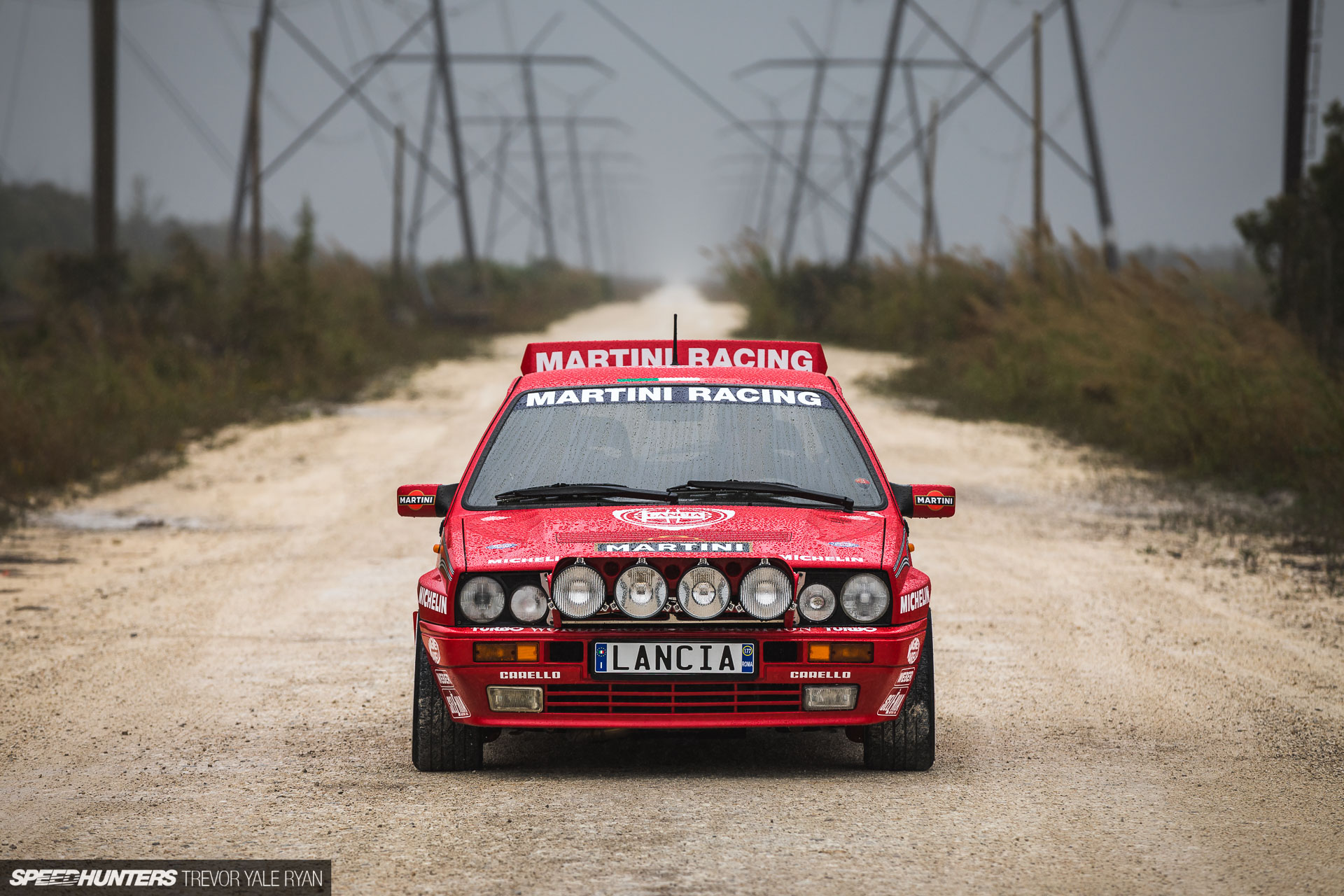 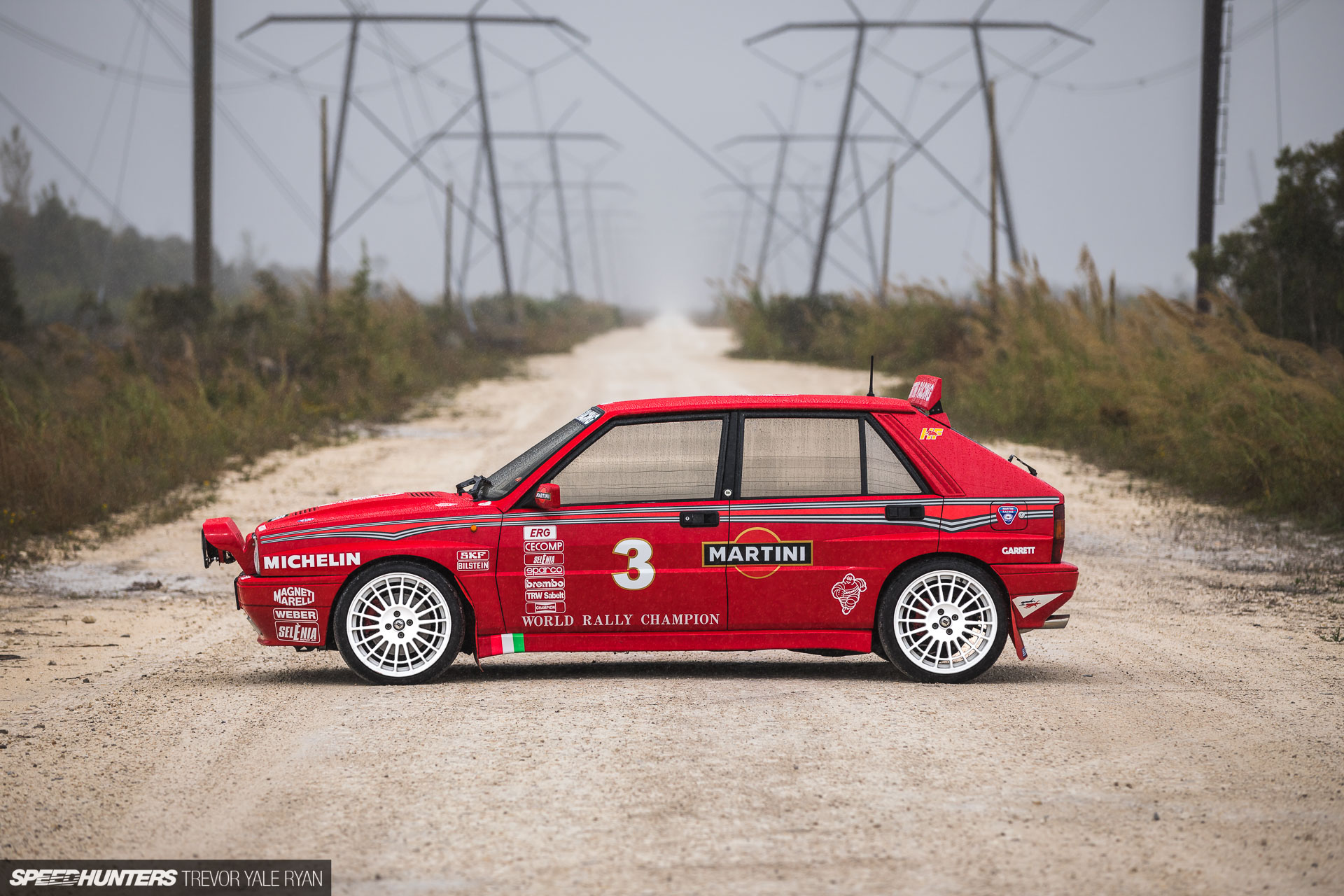 The first car at hand is an ’89 Delta Integrale, which is said to be good for 210 horsepower from the Garrett-turbocharged inline-four. Power is delivered to all four wheels, although the torque-split slightly favors the front end. Other factory features include electronic fuel injection with a smattering of Weber and Magneti Marelli parts, and modifications you can’t see include a Brena Racing gearbox and BC Racing coilovers. 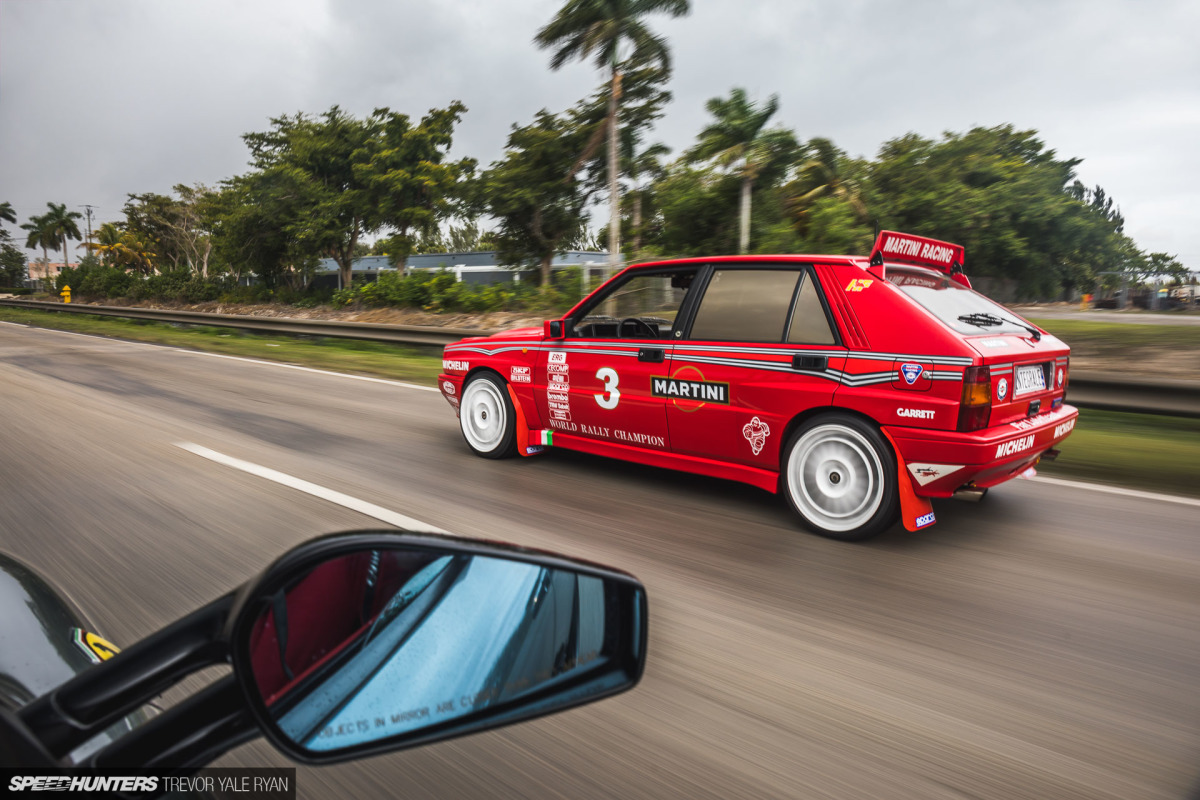 Externally, the Delta is buttoned up with a Martini racing livery — albeit a more mild design than what’s on the other car we had out — and a SIEM four-lamp front pod.

The front seats have been replaced with velvety recliners, but the rear seats and door trim are emanating their complete, pure, unadulterated ’80s essence. All in all, the whole thing looks absolutely rad, and seeing the Integrale cruise down public streets exaggerated how beastly and beautiful this car really is. Inside and out, there’s nothing quite like a Delta next to a Prius at a stoplight. 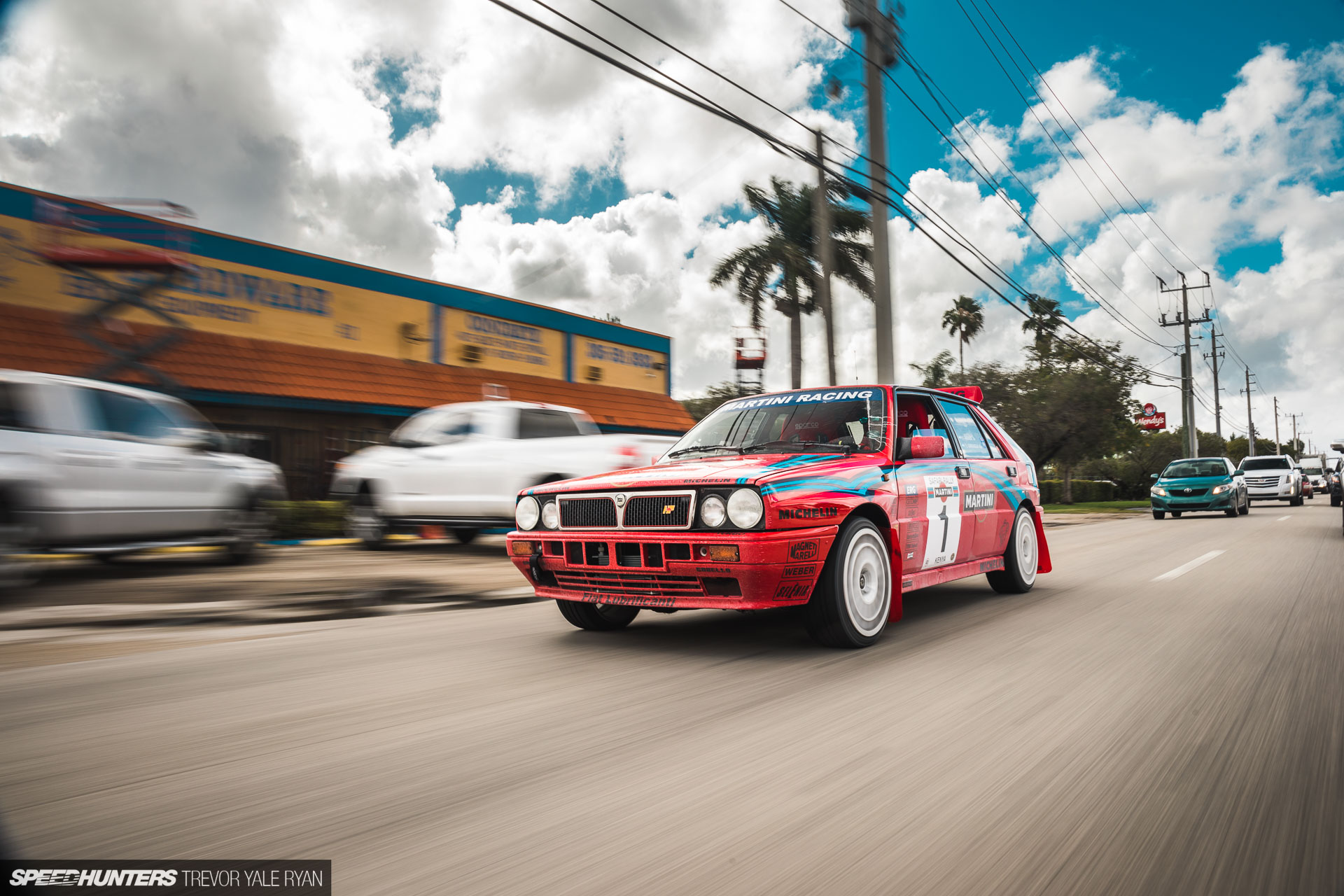 This is even more true of the other beauty at hand. Also an ’89 model, this Delta Integrale has a long and impressive list of modifications that make it a proper rally-ready tribute car. In current trim, its 2.0L four is capable of putting out 280 horsepower thanks to nearly twice the standard boost pressure from its Garrett turbocharger. 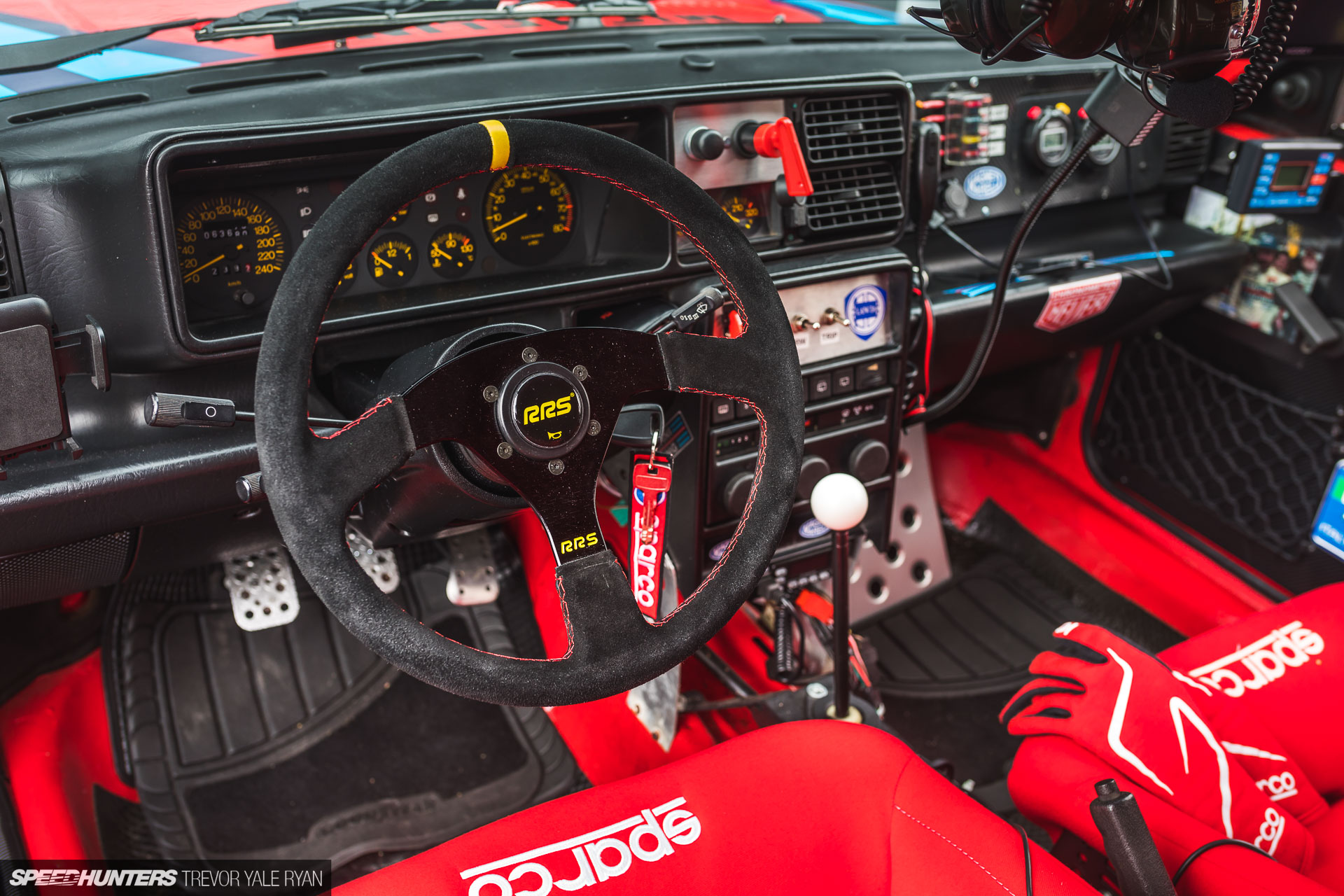 Inside and out the parts involved are a far more untamed, including upgraded brakes as well as the stripped-out interior that has had the Sparco rally parts catalog thrown at it. The list includes Sparco seats, headphones/radio units, harnesses, window nets, and so on. While the experience in the street-oriented car is really fun, this one just cranks the dial to 11.

It’s loud, it’s harsh, and it looks and feels exactly you would hope a performance-oriented Italian would. More than that, it’s exactly what an Italian car should be: a functional beauty. 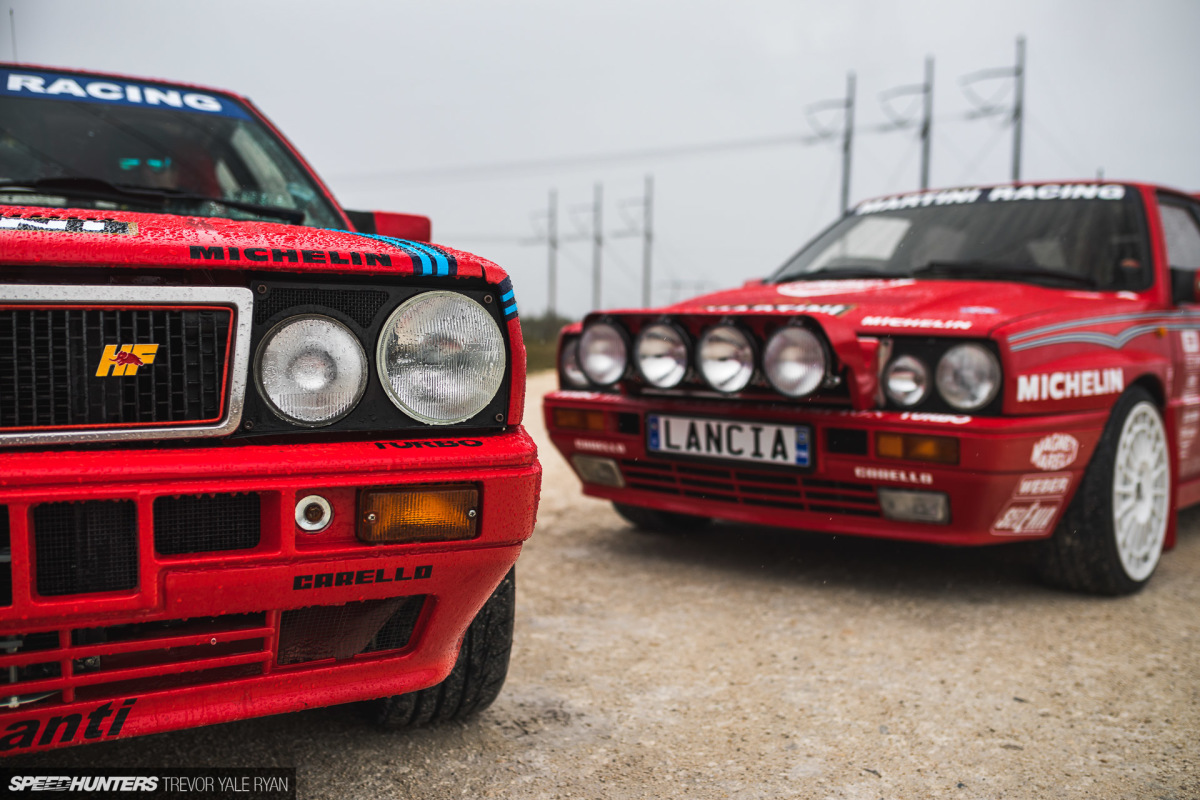 Lancia’s years of engineering combined with carefully thought out alterations result in two uniquely individual cars that act as excellent tributes to the brand’s golden era. We couldn’t help but feel a little disappointed that Lancia is no longer producing competitive, driveable, and interesting legends like the Delta, though. Maybe it’s time for the company to return to their unrestricted-budget, rich, racing roots? It’s a pipe dream, but we certainly think so.