Formula 1 Roars Into Miami, Where Cars Are Already King

A culture of souped-up cars, luxury cars and collector cars has flourished in Miami for decades. This weekend it will all be on display. 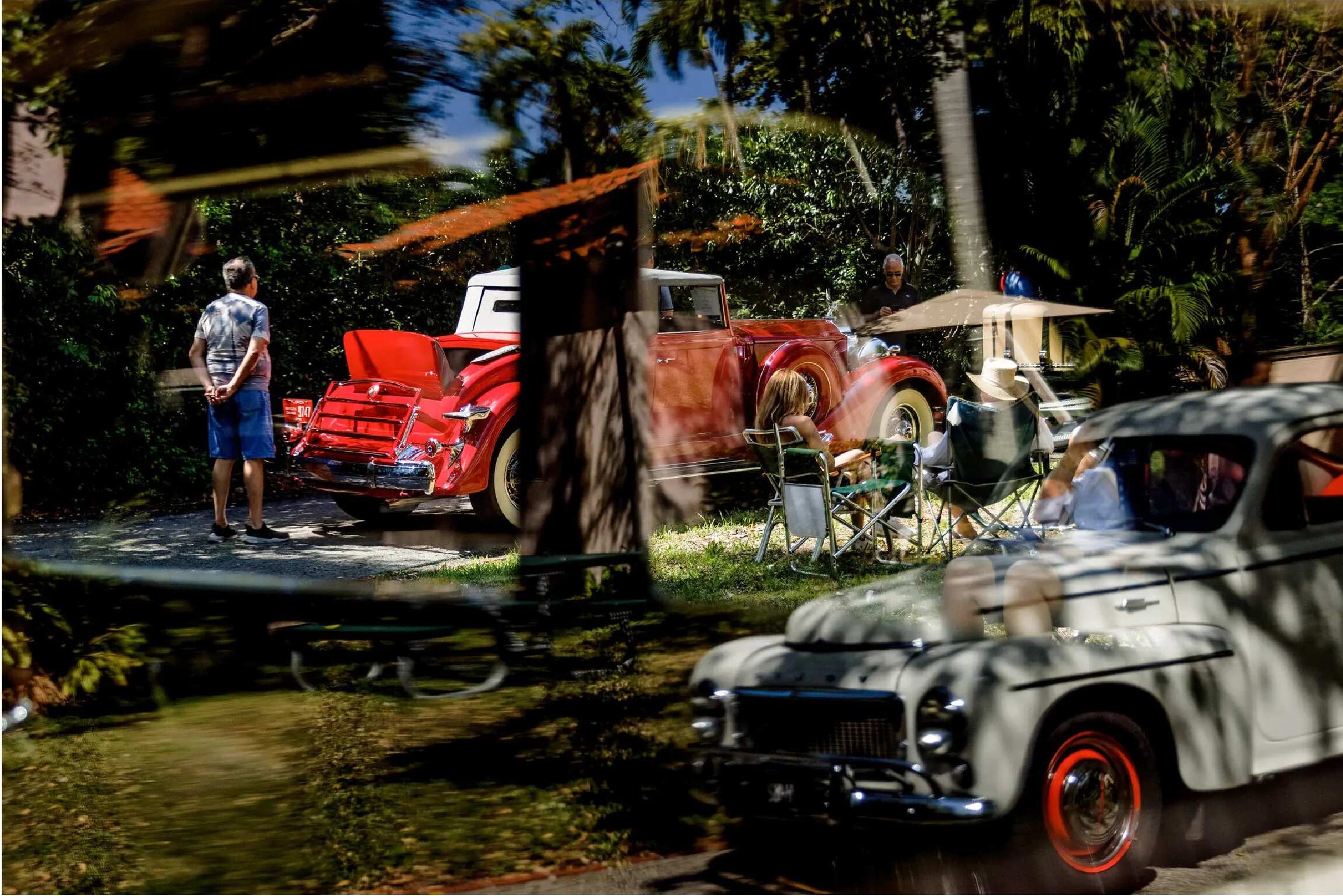 Spectators admiring vehicles at a vintage car show at the Vizcaya Village in Miami. Credit... Scott McIntyre for The New York Times

Not just any car: a 1974 Chevrolet Caprice Classic convertible in metallic golden brown with 24-inch, 24-karat gold rims that run $30,000, a custom gold plate that reads “Ch4rlie” and an all-leather tan interior kept so pristine that he does not allow just anyone inside. When the rapper Pitbull featured Charlie Brown in a music video, Juice forbade the lightly dressed young women swaying in the back from wearing shoes.

Charlie Brown is a “donk,” a customized 1970s Chevy high-riser with large wheels, the kind of big, flashy hulk that three decades ago became Miami’s contribution to American car culture and then spread to other cities in the South. Since then, the world of souped-up cars, luxury cars and collector cars has only flourished.

Some of that culture will be on display this weekend, when South Florida hosts a new Formula 1 Grand Prix, the sort of buzzy sporting event that makes Miami Miami. Formula 1, which commands a vast international audience, is seeking to capitalize on its growing U.S. popularity, fueled in part by the success of the Netflix show “Drive to Survive,” as NASCAR’s television ratings have been in decline.

Miami is the second U.S. city hosting a Formula 1 race, along with Austin — Las Vegas is next, natch — and, in a town with a frothy cryptocurrency obsession, its main sponsor is Crypto.com. Massive parties, fashion shows and world-famous DJs are on tap. 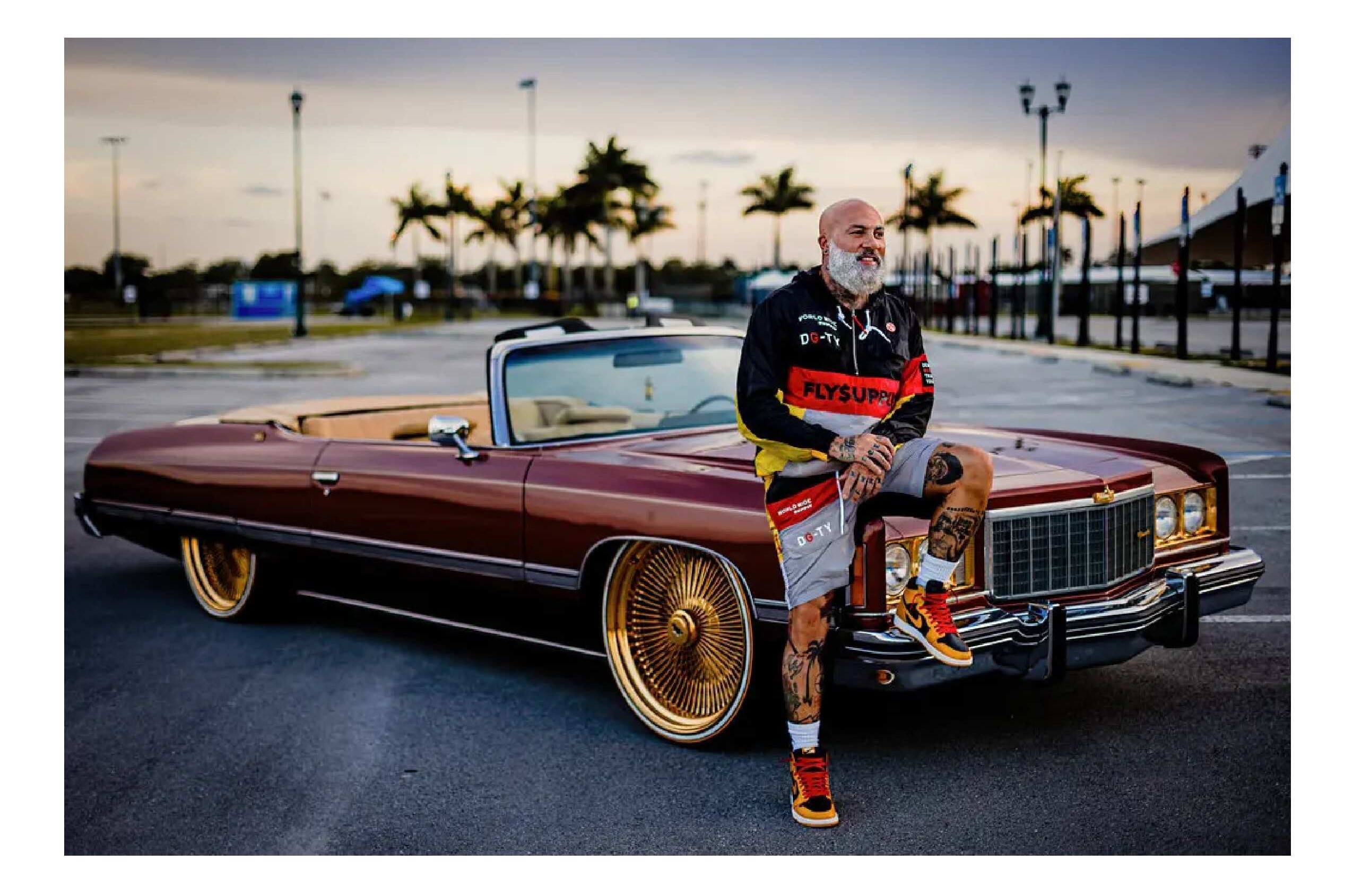 Hugo Tandron, who is known as Juice, with his 1974 Chevy Caprice Classic, which he calls Charlie Brown.Credit...Scott McIntyre for The New York Times 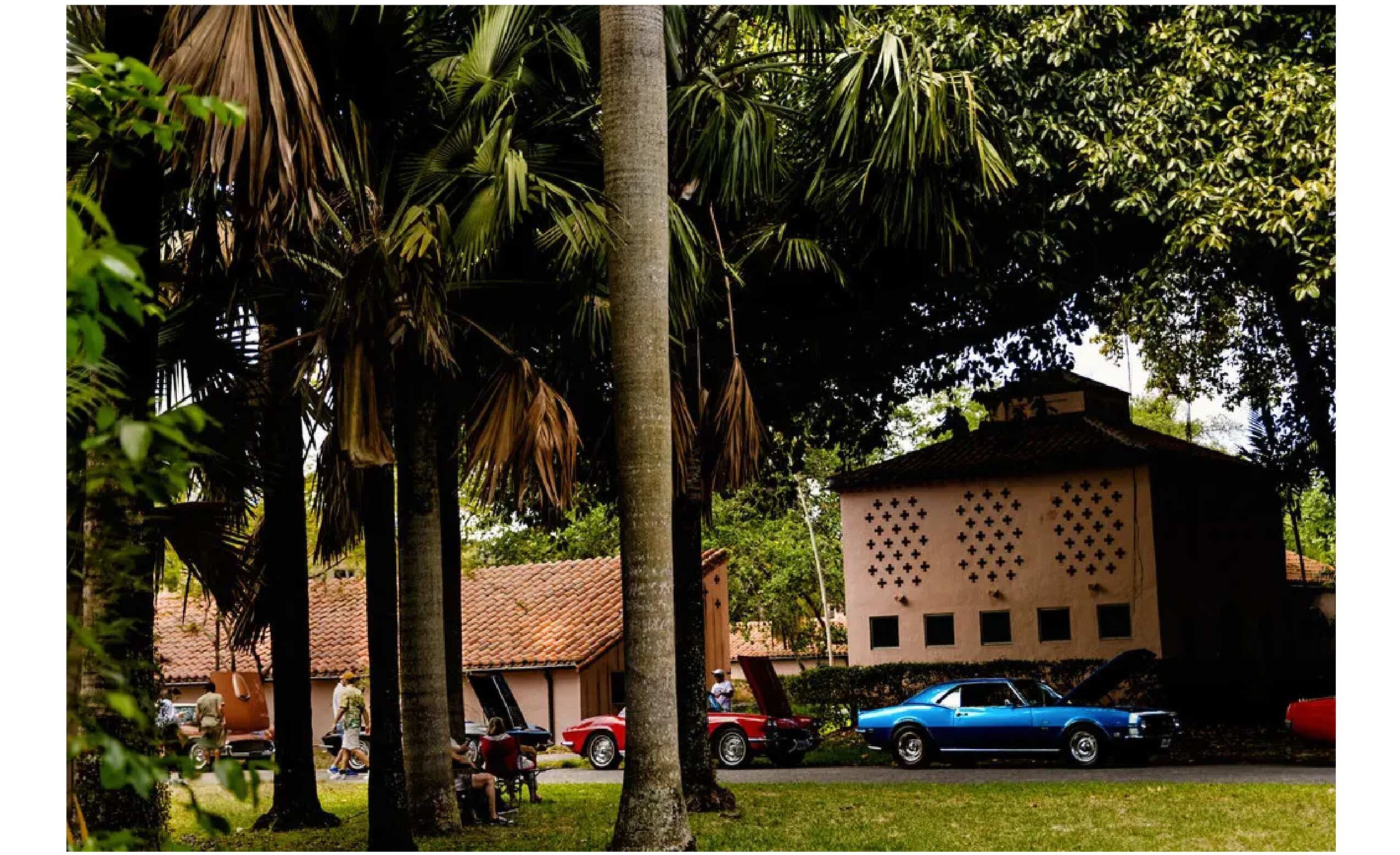 A vintage car show at the Vizcaya Village in Miami in April. Credit... Scott McIntyre for The New York Times

Esteban Ocon, a driver for the Alpine team in this weekend’s race, was eager to experience the city and its car culture firsthand. “I’ve already seen it in ‘Bad Boys’ and in the movies,” he said in a Formula 1 publicity video that featured shots of antique cars on South Beach. “So to see it properly is going to be fun.”

Los Angeles is the capital of the nation’s iconic car scene, with its muscle Chryslers and Fords. Miami, a kindred metropolis of palm trees, sunshine and highways, has been playing catch-up ever since the 1984 debut of the TV show “Miami Vice,” in which Crockett and Tubbs rode in a replica black Ferrari Daytona Spyder to the sound of Phil Collins’s “In the Air Tonight.” (Ferrari sued, then had a change of heart and donated Crockett’s white Ferrari Testarossa.)

“Cali has the culture, which is lowriders, and they’ve been doing that since the ’60s,” said Juice, a 51-year-old barber whose real name is Hugo Tandron. (He is Cuban American, and “jugo” is Spanish for juice.) “We’re always trying to catch up to Cali, especially Los Angeles. But our car culture has grown within the past 20 years. It’s grown immensely.”

With its undeniable affection for bling, Miami draws moneyed tourists who rent exotic sports cars to tool around South Beach while on vacation — as well as residents whose day-to-day wheels represent jaw-dropping luxury. A high-rise building in Sunny Isles Beach, the Porsche Design Tower, has an elevator that delivers cars to residents’ doors.

“I’ve got a cousin who lives in Houston and is in the oil industry — Houston has a lot of oil money — and they don’t see the kind of cars on the road for daily use as we see here,” said Ira Shapiro, 68, a past president of the local chapter of the Antique Automobile Club of America. “A Rolls-Royce is a dime a dozen. A Lamborghini, a Maserati. High-end Porsches and Ferraris.” 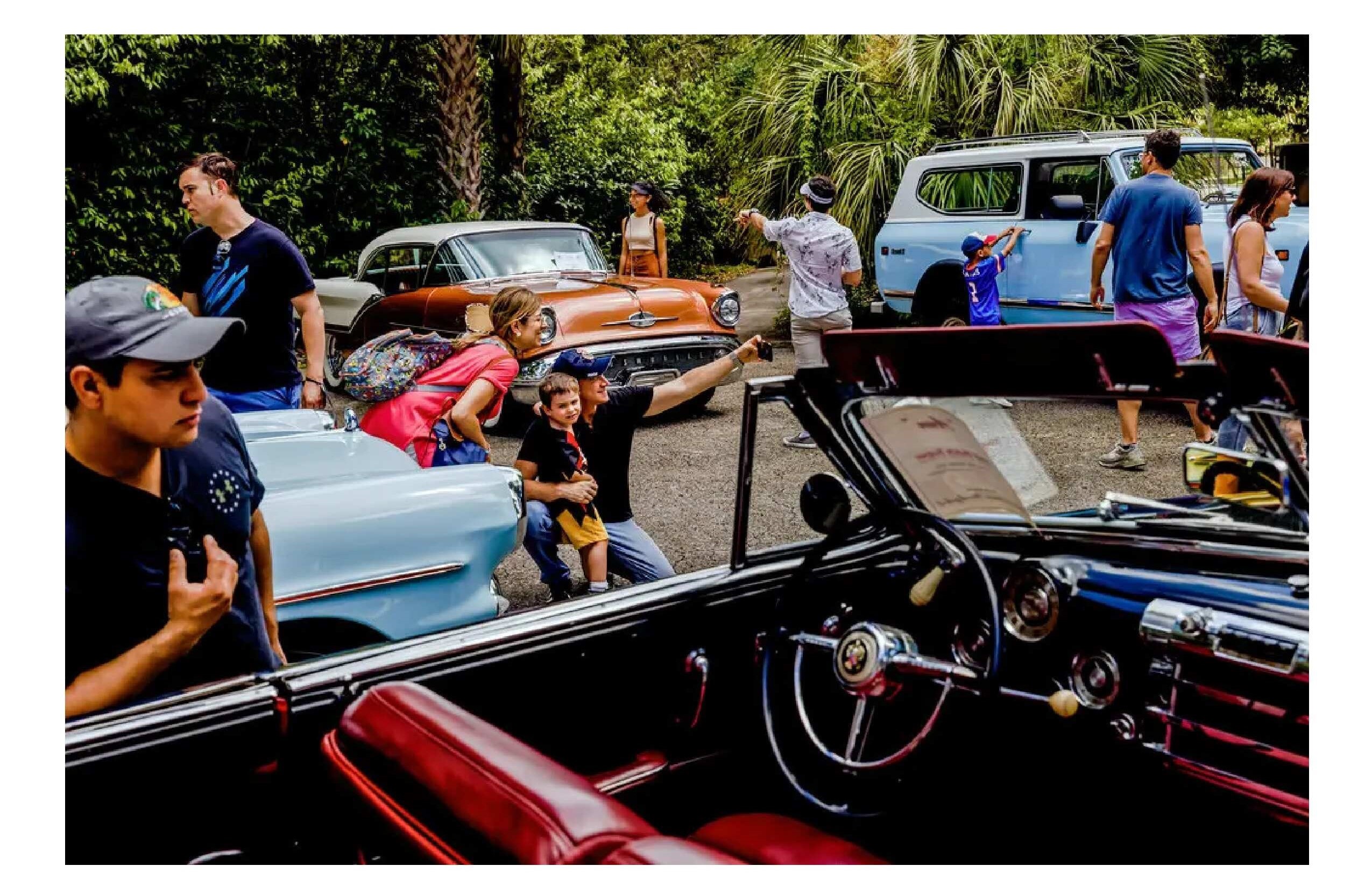 Protecting vintage cars in Miami can prove to be a challenge because of the heat, humidity and salty air. Credit...Scott McIntyre for The New York Times 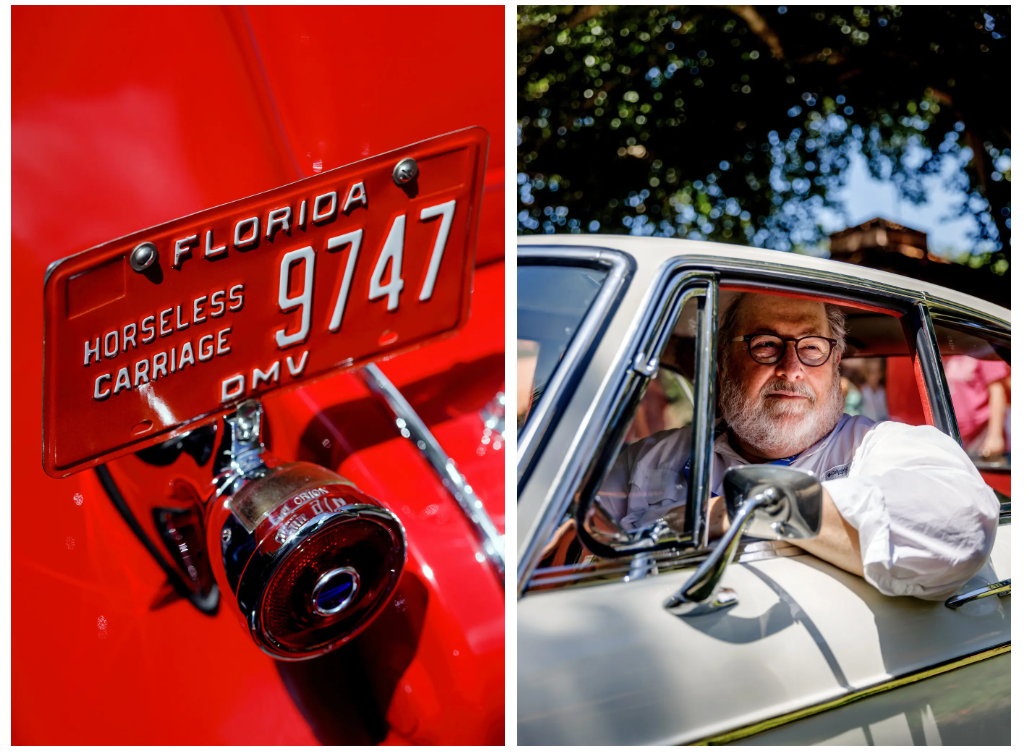 (Left) A Florida license plate on a 1934 Packard coupe.Credit...Scott McIntyre for The New York Times

(Right) Ira Shapiro in his 1968 MGB-GT.Credit...Scott McIntyre for The New York Times

Florida is a top market for luxury cars, along with California and Texas, said Joseph Folz, a former vice president, general counsel and corporate secretary of Porsche Cars North America, who is retired and living in Southwest Florida.

“Florida is probably just about everybody’s first-, second- or third-biggest market, depending on the manufacturer,” said Mr. Folz, who noted that Porsche’s largest dealership is in Pompano Beach, north of Fort Lauderdale. “You don’t sell a lot of Ferraris out in Kansas.”

But that is not the car culture that most enthusiasts in Miami say they cherish.

The community of people collecting and restoring cars — an expensive hobby in a city with high income inequality — has forged friendships more lasting than a fleeting joyride, said Gaston Rossato, who has seen interest balloon from a decade ago, when he opened the Barn Miami, now a 10,000-square-foot dealership. The oldest model on display is a 1933 Alfa Romeo.

Some collectors come from countries without good enough roads or security to drive high-end cars, Mr. Rossato said, so they keep them in Miami. Here, though, they face the challenge of protecting the cars from the heat, humidity and salty air. Some owners install air-conditioners and dehumidifiers in their garages. Others pay for off-site climate-controlled storage. Recently, even in this rarefied world, some owners have started replacing gas engines with electric ones.

Some years ago, to attract fellow collectors, Mr. Rossato, 37, began driving his red 1974 Alfa Romeo GTV on Sunday mornings to Panther Coffee in Miami’s hipster Wynwood neighborhood. He would order a latte and a croissant and mingle. The group peaked at about 70 cars, he said. Similar events followed at a brewery.

“Cars were the excuse, but ultimately it was all about the people,” he said. “There’s that misunderstanding that Miami car culture is only exotic cars — brand-new Ferraris and Lamborghinis — but it’s not.”

Mr. Shapiro’s club admits only owners of classic cars restored to their original condition, like his 1968 MGB-GT in “Old English White.” The members hold shows during the mild winter and spring seasons. Among the cars they display are “Havana classics” — antiques dating back to before the 1959 Communist Revolution. 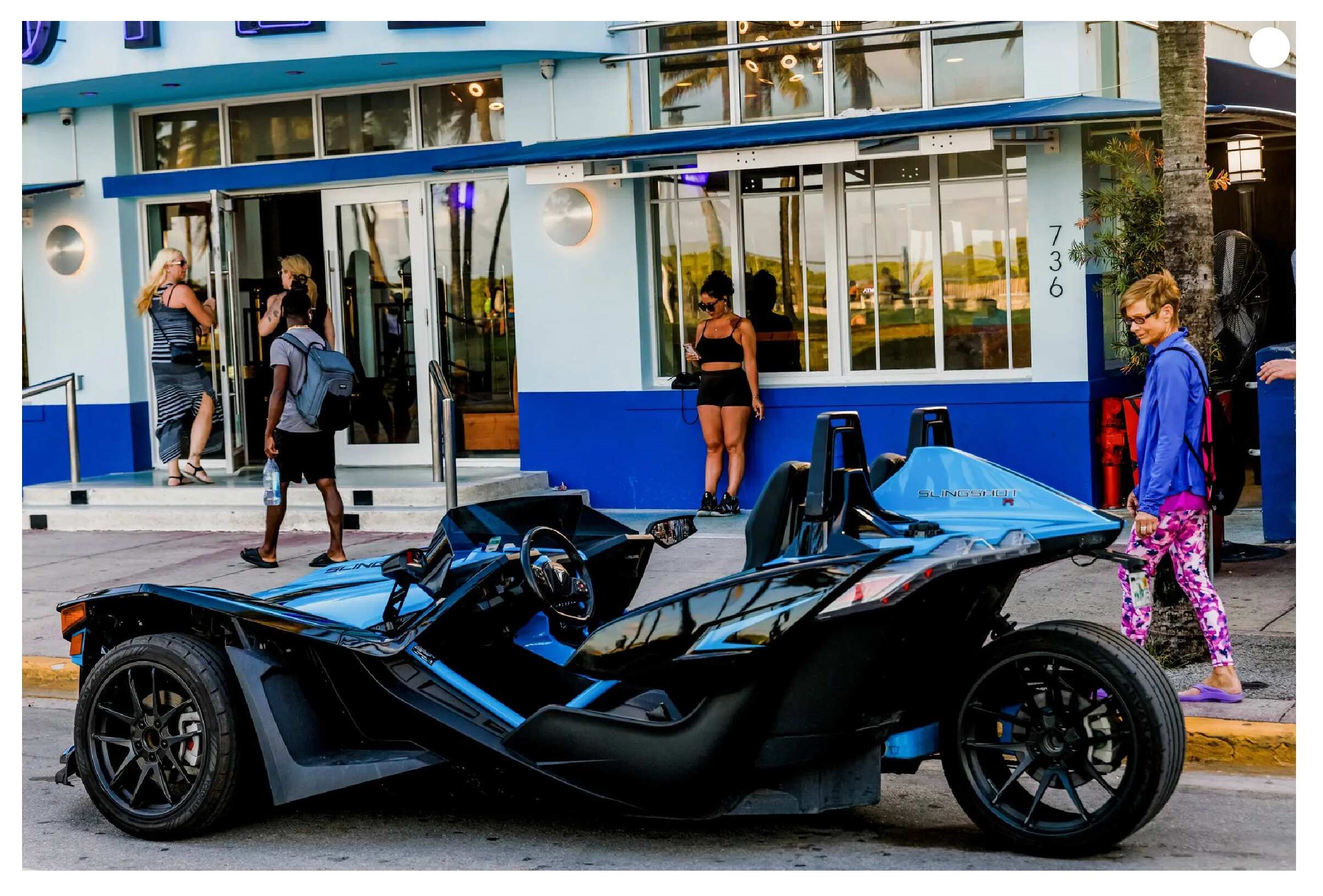 Tourists walk past a Polaris Slingshot parked along Ocean Drive.Credit...Scott McIntyre for The New York Times 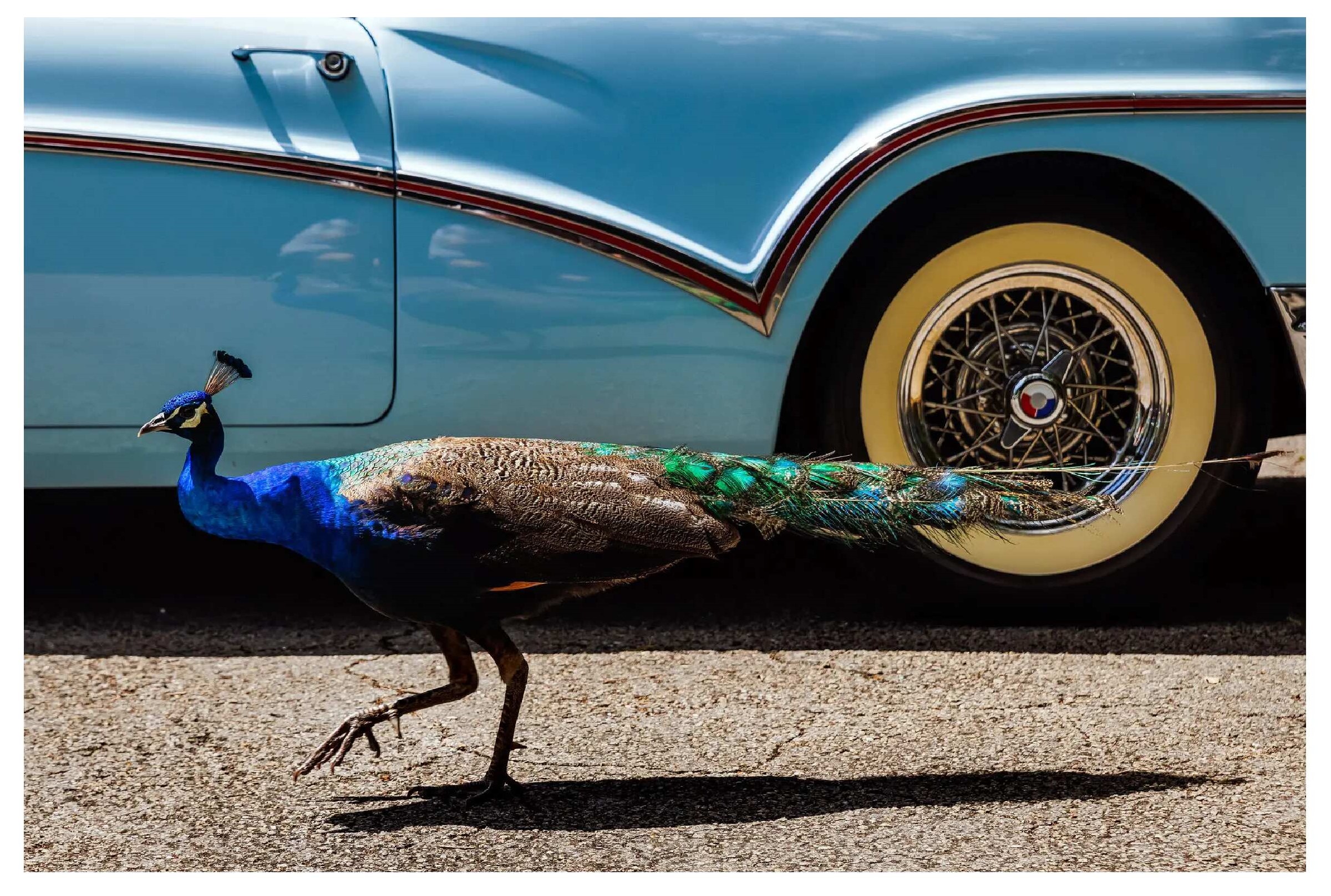 A peacock strutting past a 1957 Buick Special at the Vizcaya Village. Credit... Scott McIntyre for The New York Times

“Multiple guys in our club” — and they are mostly guys, though the number of women has grown, Mr. Shapiro said — “have cars that their father would have had in Cuba.”

He has mixed feelings about the Grand Prix, despite being a Formula 1 fan since the 1970s. The track in Miami Gardens was built in the lots around the Hard Rock Stadium, where the Miami Dolphins play pro football, and some neighbors already complain about too much noise. The Monaco Grand Prix it is not.

Organizers had wanted to race downtown, between Biscayne Bay and the gleaming Miami skyline. Instead, they constructed a faux marina for dry-docked boats in a part of the venue named the “Yacht Club.”

Florida likes to build highways, despite the state’s vulnerability to climate change, and ordinary Miamians, with limited public transportation options, spend long hours in their cars. A defunct local blog was aptly named “Stuck on the Palmetto,” a reference to the perennially backed up State Road 826.

“Cars are endemic here,” said Justin Landau, the co-chief executive of El Car Wash, a chain of express carwashes that offers unlimited washes for $29.99 per month. One of its banners reads, “Rain doesn’t clean cars.” 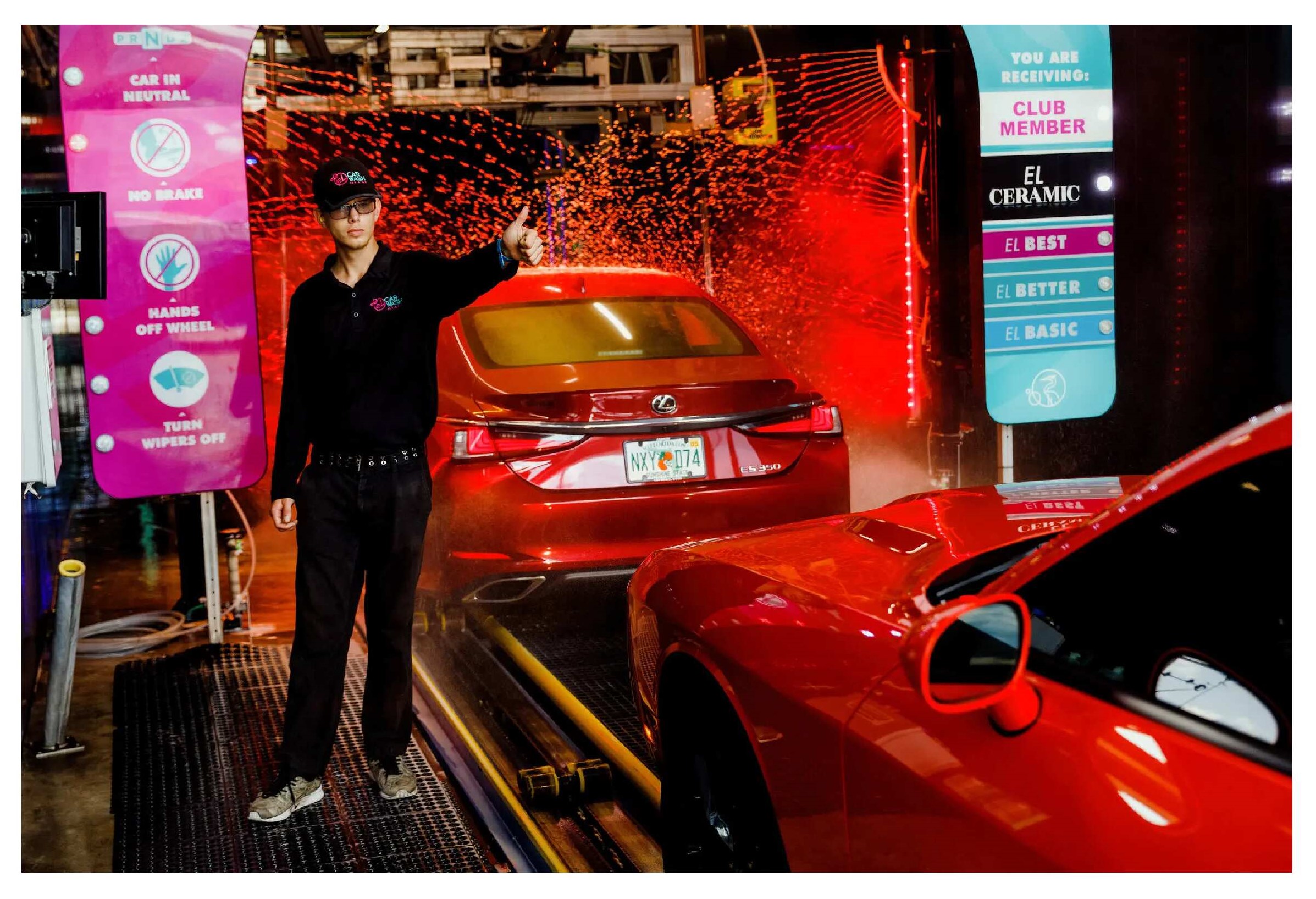 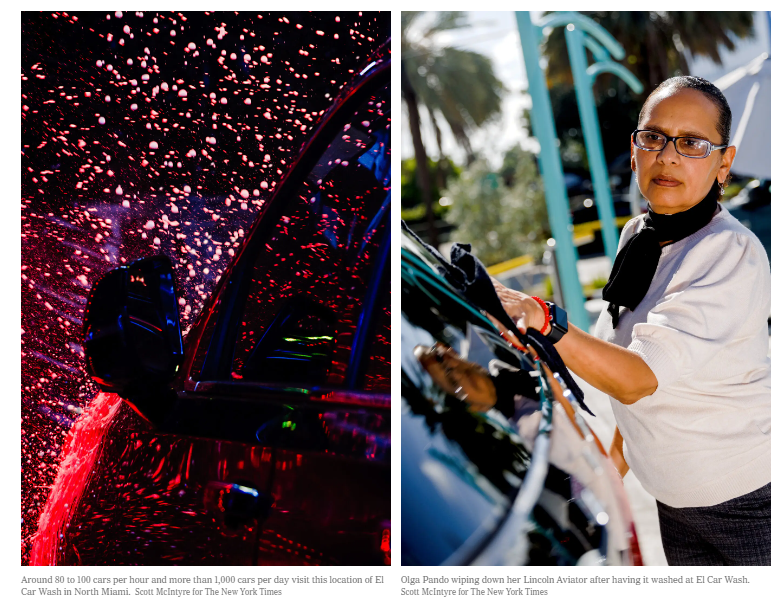 The company has sold about 100,000 memberships, Mr. Landau said, and the average member washes their car twice a month. Lines seem especially long on Friday afternoons, ahead of the weekend.

“People spend a lot of time in their car, and it’s also a status symbol and a way of life down here much more than in the Northeast,” said Geoffrey Karas, the other co-chief executive, who like Mr. Landau is originally from New York. “It’s just part of the Miami lifestyle.”

For Juice, cars have been a predilection since his childhood in Carol City, a Miami Gardens neighborhood. After some brushes with the law, he began cutting Major League Baseball players’ hair in 1993 and now has a barbershop inside the Miami Marlins’ stadium. The pitcher Dontrelle Willis bought him the ’74 Caprice, his dream car, off eBay. A Charlie Brown figurine hangs from the rearview mirror.

Juice meets other donk owners on Sunday evenings, in the parking lot of a Sonic. They hang out, listen to music and geek out over car upgrades. He organizes a New Year’s Day ride that draws hundreds of drivers.

One recent evening, as Juice showed off his car in a public park, a man named Miguel approached and sheepishly asked if he could take a closer look. 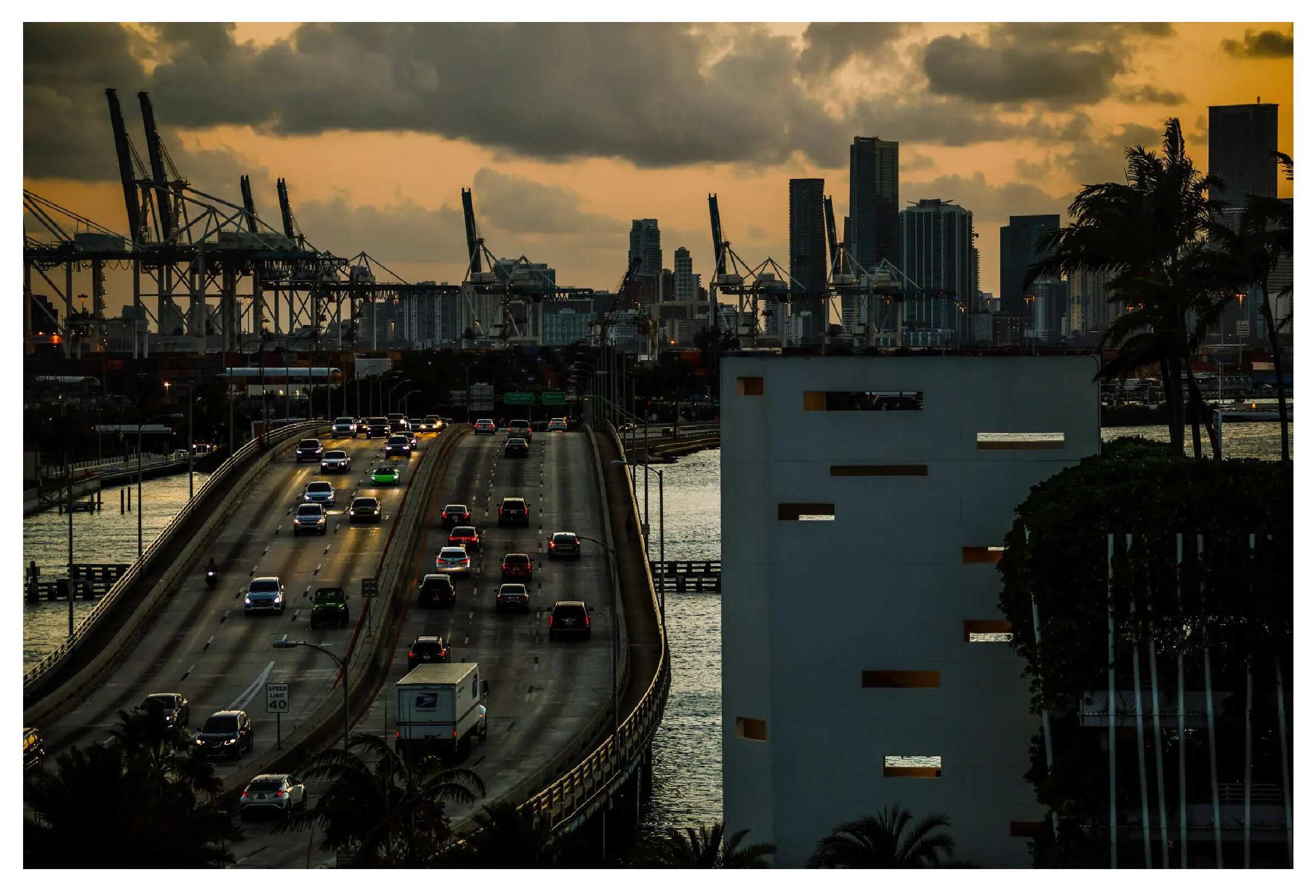 The 2022 Miami Grand Prix will take place on Sunday at the Miami International Autodrome. Credit... Scott McIntyre for The New York Times

In an earlier version of this article, a photo caption misstated the typical number of cars that get washed at El Car Wash in North Miami. About 80 to 100 cars get washed per hour, not 80 to 100 per day.

Patricia Mazzei is the Miami bureau chief, covering Florida and Puerto Rico. She writes about breaking news, politics, disasters and the quirks of life in South Florida. She joined The Times in 2017 after a decade at The Miami Herald.

A version of this article appears in print on May 8, 2022, Section A, Page 20 of the New York edition with the headline: In Miami, Where Flashy Cars Are King, Every Day Is a Grand Prix.
<  Back to Blog
Privacy Policy Terms and Conditions Cookie Settings
Powered by SpeedDigital